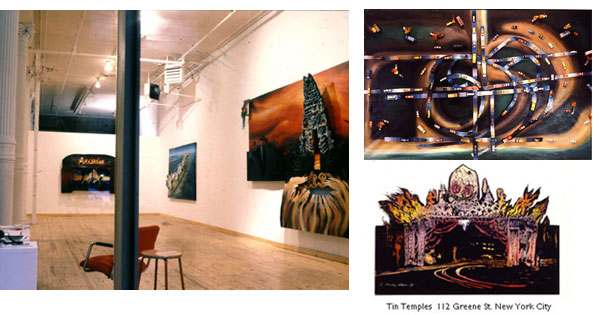 There are many stories of artist friends throughout history. Most of them were pretty edgy by all accounts – maybe even more like rivalry than friendship. Gauguin and van Gogh argued fiercely in the famous ‘yellow house’. Picasso and Braque worked side by side but later Picasso referred to Braque as ‘my wife’. The artist friendship I want to write about is not as illustrious, and probably will never be historicised, but it was extremely important to me. Now that the friendship is at an end, I’ve decided to write my personal story of a friendship between two artists.

Vincent van Gogh and Paul Gauguin at the Yellow House in Arles.

My studio at the Diorama in Regents Park

When I came to London, I had to struggle to find my feet. All that I had done in New York was in the past. The large Tin Temples exhibition at 112 Greene Street seemed like a long time ago. I had no network, no gallery to exhibit with, no commissions. Luckily, my good friend Steve Singer who was about to return to New York introduced me to the artists at the Diorama, where I was fortunate enough to be able to rent a studio.

There I was able to settle into an amazing studio on the rooftop overlooking Regent’s Park, and begin work. Suddenly I found myself in a community of artists, many of whom were very good indeed. My friend Steve Singer was creating amazing steel animals. Among the artists there was an elderly painter named Denis Bowen, renowned as having had one of the first contemporary art galleries in London. Denis made spray bomb paintings, long before the graffiti artists made it fashionable.
I decided to continue my studies, learning foundry practise and welding at Tower Hamlets College. My first bronze sculptures explored my interest in the tension between 2D and 3D. I was creating figures in a sort of post cubist flattened space.

Denis Bowen saw some of my flattened bronze figures and said I should go and see an artist he knew named Ivor Abrahams. Denis said my work reminded him of Ivor’s. Abrahams also was exploring a similar post cubist flattened space in bronze. And like myself, he had studied the casting process, having been an apprentice at Fiorini Foundry. When I first saw his Naiads in Whitechapel (sadly whereabouts presently unknown) I understood what Denis was talking about. I phoned and arranged to visit Ivor in West London. He was extremely gruff with me at the door, but in the background I could hear his wife Evelyne calling out “O be a little gracious to him, Ivor. He likes your work after all.” So that was how the adventure in art and friendship began for me. It became an essential part of my working life.

We had so many things in common – we were both Jewish, both figurative imagists, both exploring narrative in our own different ways. Both of us knew the casting process – he through an apprenticeship at Fiorini (where I later began casting my own work), and me through studying at Tower Hamlets and casting my own work. Each time we saw new work by each other, there was the surprise and sense of wonder, but also the familiarity, as if a brother in arms.
Recently I created a touring exhibition of sculpture, called Moment to Moment. Ivor came to see it when the piece was installed at Rochester Cathedral in 2013, (see the BBC coverage of the exhibition here). Ivor was very impressed with it, and said to me “Randy, you have made a terrific achievement”. That was a magnificent moment for me. He suggested we exchange works. He selected one of the small sculptures from the Moment to Moment series, and in exchange I took a beautiful collage painting. It was a seascape, one of the ones Ivor created after moving to the Ramsgate coast. This exchange of work was very meaningful for me, and I cherish this piece, as I do all of the works Ivor gave me over the years.
In the end, we remained friends for over 20 years. Both of us developed separately in our work, but there always remained a dialogue between us.

Part of the Moment to Moment exhibition in Rochester Cathedral

At the memorial service for Ivor Abrahams yesterday, artist Michael Sandle said that it was hard to believe he would never see Ivor again. And so it is for me. Never again to eat with him in the rough Chinese restaurant down in Soho. Never to hear again how he had managed to position one of my sculptures in the Royal Academy summer exhibition very well. Never to visit an art gallery and discuss the work with him. Never again to walk along the coast at Ramsgate together. It is truly hard to comprehend.
This little essay is far to modest a memorial to my friend, and to our friendship. Far too brief to capture anything of the expansive, joyful, intelligent and dynamic man he was. However I hope it can serve as a memorial to our friendship.

You can read more about Ivor Abrahams in his obituary from the Telegraph here.