Now Lie In It
There’s been a lot of talk about beds lately, and as usual it is at core a discussion of money. How much is an unmade bed worth? And what is the relationship between beds and art? Jonathon Jones writing in the Guardian talks about the Velasquez Venus, in the National Gallery. Seems a bit far fetched. For one thing, the portrayal of the bed in painting is a vast body of work, and why Velasquez should spring to mind – instead of Bonnard, Sickert, Degas, or hundreds of others, is unclear. But we are talking about the sculptural presence of the bed, and for this there are many other examples in art which are more relevant. 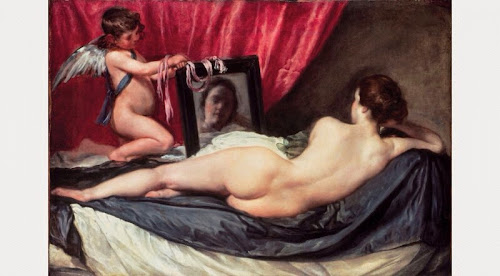 Maybe the most relevant work of art in this context is the Rauschenberg Bed. Somehow this work retains all the angst and private world of sleep and yet is transformed into a work of art.

The Rauschenberg bed is a testament to turmoil and personal drama more effective for not overstating. The bed really is subverted to the inner world of the artist, and for this reason is convincing. When Louise Bourgeois uses the bed, it is an invitation into the world of dreams. The Emin bed is a little harder to believe, and reminds me more of a rock group’s hotel room after a raucous night. Even harder to believe that an artist at the top of her game, being selected for the most prestigious art award in the nation, would really be suffering this much. 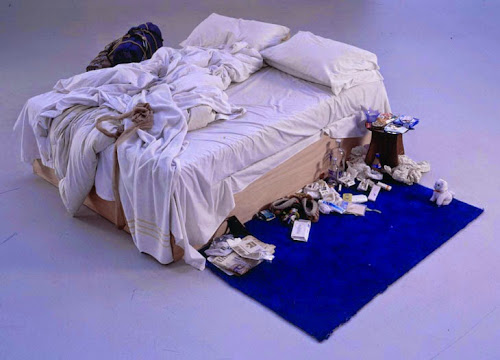 It is more like a jolly sex ride in Disneyland. For me, it brings to mind the famous Peace Bed of John Lennon and Yoko Ono. That, also has the whiff of a 5 star hotel, but the self imprisonment of two people in the name of peace is undeniably powerful.

There have been other beds, some fairground and goofy, others more serious. The Ron Mueck bed astounds and repels at the same time, creating a wonderful memorable play on our expectations, while not really upsetting or disturbing expectations. 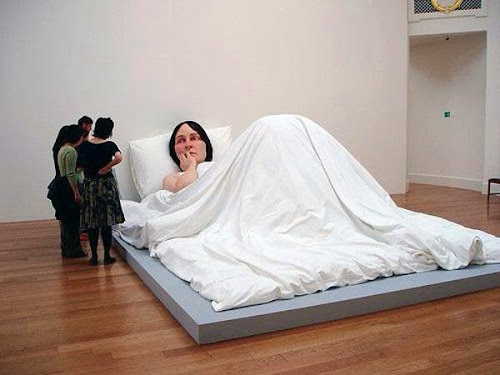 For playfulness, it would be hard to top the distorted Bedroom Suite by Claes Oldenburg, playing with the forced perspective of furniture catalogues. A bed which will not provide rest, triggers a pop surrealism of materialist nightmares.

One of the most memorable bed works has got to be the Peace Bed with John Lennon and Yoko Ono. It had everything – political commitment, an immortal rock star, and the attention of the world’s media. Plus it was sexy. 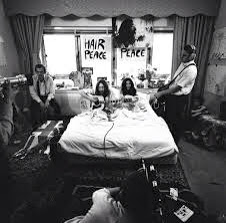