Sculpture is an art form using solid materials. Stone, metal, wood – these are some of the traditional building blocks of sculpture. And it is usually dense, blocking out the light, and leaving a dark shadow on the ground.

What happens when sculpture lets the light in? 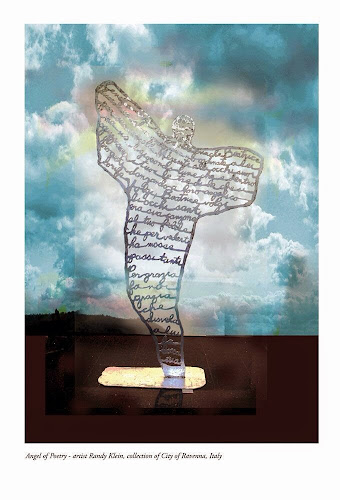 In a lot of my work, I’ve laboured to keep it light, and to make the sky shine through. To quote John Russell Taylor, “Klein has a rare spirit and believes in livening us up rather than dragging us down. Some artists have to labour long and hard to translate their ideas into sculptural form. How much better to be like Randy Klein, who seems to think in sculptural terms as easily and directly as the bird sings.”

Sometimes, the work gains lightness from the gaps. Likewise, there is a play with form which gives a feeling of lightness. In the Angel of Poetry, above, the sculpture is made up entirely of writing. This serves to remind you that although it is a heavy metal object, it is also a sign or symbol, pointing to a meaning away from the physicality. And the sky peering through the gaps also contrives to make the work feel light. 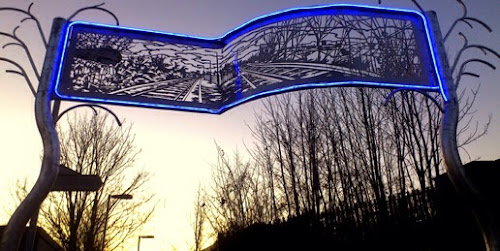 In another public sculpture, at the entrance to a train station, the sky and landscape peeks through the solid form, allowing a sunset to insist on undermining any heaviness. The addition of LED lighting also lifts the work out of shadow. And it is a drawing, with an illusion of depth of perspective. This again reminds that this is an illusion of a place, mere lines of depiction, which we have to conspire with to complete the story. 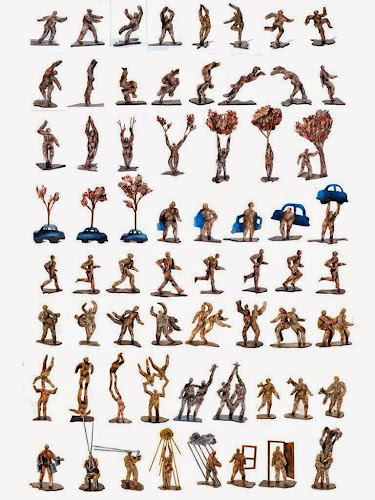 Another way I’ve attempted to give a lightness to solid form is through movement. Here, in a series of over 100 sculptures, the works create the illusion of movement in the mind of the viewer, like the single frames of an animated film. This work, called Moment to Moment, has toured public venues in Italy, Scotland and England and has been seen by over 100,000 people.

In a way, all of my work has this quality of narrative. And this also helps lift it out of the realm of heaviness and into the realm of fable. Something which exists in our minds as we contemplate the story. We can forget about the toil and force needed to weld the steel or forge the bronze, and just dream.